Keys for hitting great shots with the BIG STIK

Lining up the ball toward the toe 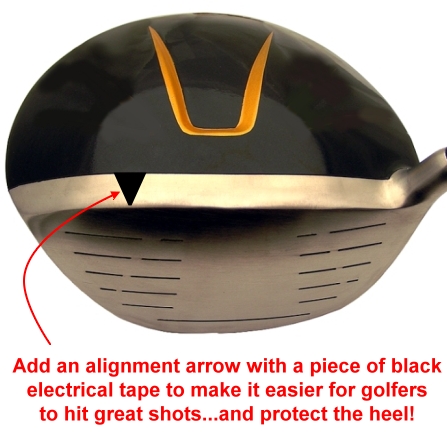 As mentioned in one of the Keys above, it is best to line the ball up toward the toe because most golfers hit this club on the heel. This is even more important if you are letting other people hit it or using it at a charity golf outing where lots of people will hit it. In those cases, we suggest adding an arrow made out of black electrical tape toward the tow as pictured. This will make it easy for the person conducting the driving range practice shots and the contest hole to say, “Line it up with the arrow toward the toe because the heavier swing weight will stretch your arms out.”

We will include simple instructions inside the box for extending and collapsing the shaft. You can also see those online on www.divnickgolf.com/adjustable/instructions.php. Unless you are a giant with extra long arms, you won’t be able to hold the head and grip of this long driver as shown in the instructions, so you will have to hold the shaft below the head. BE VERY CAREFUL not to pinch your fingers when collapsing. Be sure to use concrete to collapse onto…it likely won’t collapse on a carpeted floor, and it can dent or break a tile or wood floor. (Basically, to collapse it, you smack the grip end down into a concrete surface which disengages the shaft.)

Because we use a special gold titanium alloy, we are able to keep the head down to the same 200-gram weight as a regular driver head. But the “swing weight” will FEEL a lot heavier because it is on the end of a longer shaft, and the two-piece steel shaft is also heavier. The shaft has more total flex because of that length and weight. So the best shots will be from those who develop their swing smoothly and let the shaft snap through the ball. Those who swing hard and fast will “out-swing” the shaft. So we suggest that the person conducting the contest or driving range practice encourage people to swing smoothly and slowly.

The lie angle of this head is 2 degrees flatter than a normal driver head, but not flat enough for the head to rest flat on the ground on the end of this long shaft. So the toe will be up a little. Golfers will notice that right away, but it won’t be a problem for their shots. After all, they are not using this 5-foot driver for tournament play. We could solve this by making the heads with a much flatter lie angle, but then the heads wouldn’t work on normal length shafts. We have a surprising number of customers who purchase these heads with normal-length graphite shafts to use as their regular driver. Obviously, they aren’t concerned with USGA rules. But they are getting the best drives of their life with the larger head because of its huge sweet spot, and its greater spring-effect. So we don’t want to make the lie angle ONLY for the long shaft.

Expect Head Damage at Outings, But Help Prevent It

Like all drivers, the face is the most durable part of the head. But if the golfer mis-hits and makes ball contact with the heel, toe, crown, or sole, it can cause a dent. Golfers of all skill levels usually participate in charity golf outings, and some of them will mis-hit and might cause dents. So that is something to expect over time. That is also why we recommend that the person running the driving range shots and/or the contest hole emphasize the instruction to line the ball up toward the toe and DO NOT SWING FAST.

The head is made out of titanium-gold which is very durable. But on the end of this long shaft, golfers will contact the ball with portions of the head other than the face! Some people will swing and hit the ground behind it, others will swing over it, and others will hit the ball with the toe or heel which will mar the paint and even dent it since the shell isn’t nearly as tough as the face. This is common with the longer club and how poorly some people will swing. That’s also part of the fun of watching…even excellent golfers have been known to whiff their first try. As noted in the Keys above, the most common tendency is to hit the ball with the heel of the head. In other words, they will line it up with the center, but the swing will “lengthen” their arms and they will make contact toward the heel. Many golfers also “swing over the top” or they will hit the ground first. Again, this is part of the fun and part of the challenge.