The Divnick™ Whole-In-One Adjustable is most like an iron. It is the shape of an iron, and replicates every loft in a full bag, plus half lofts. But there are some things the DIVNICK™ doesn't do as well as conventional clubs and we want you to know what they are before making a purchase decision.

1) It doesn't hit as far as a driver. Distance is a function of club-head speed. The longer the club, the larger the swing arc, and the faster the head speed. The standard 38.5" model is the length of a 4-iron, so it is like teeing off of a par 3 hole or any time you use your 4 iron. You can lower the loft to a 3, 2, 1, or the "D" driver loft, but that generally only makes it more difficult to hit solidly. The lower the loft, the smaller the effective sweet spot, just as with all clubs. Most people get the best distance when they match the 4-iron loft with the 4-iron length. RECOMMENDATION: Use the forward tees so you can still reach the green in regulation. Make it a fun round that will provide lots of opportunities for pars and birdies.

For those who want driver distance and portability, we make telescopic drivers with surprising distance and accuracy off the tee and fairway.

2) The other extreme club in terms of length and head-shape is the putter. The DIVNICK™ head is not nearly as heavy as a putter head, and it is on a much longer shaft. It does have a putter loft and has 3 alignment lines on the back of the head to help line up the putts, but it takes a little getting used to. Most people choke down to the bottom of the grip and take a fairly normal putter stance. We also offer telescopic putters for those who want the more traditional look and feel, but still want travel portability.

3) Weight is another huge difference. The lightest club in your bag is your driver even though it is the largest and longest. The heaviest is the putter. Most of the weight difference is in the head. Wedges are very heavy and on short shafts for extreme control in the sand and tall grass. Since the DIVNICK™ is quite a bit lighter than those clubs, it won't slide through the grass or sand as easily as your sand wedge. It has a standard 4-degree sole bounce when adjusted to the first sand mark (52-degrees), but most people agree that it takes some practice from the sand. We offer telescopic wedges for those who want maximum performance out of the sand.

4) The lie angle of the head to the shaft is about half way between a normal putter and long irons. Therefore, with the lower lofts the toe is a little "up". With the putter loft and normal putting stance which has the club head closer to your feet, the heel will be "up" a little. Based on our robot machine tests and player feedback, this does not have a major impact on the flight of the ball, so it is just something you'll notice at first, then get used to. Nevertheless, for those who want ultimate consistency with long fairway shots, we offer telescopic hybrids.

Offsetting these disadvantages is its portability and its ability to be adjusted to half lofts for incremental distance control. You can take a full swing from anywhere on the course and let the loft-setting produce the distance. It's really fun to be close to the green with a tree or a trap between you and a close pin, loft the head up to 70 or 80-degrees, take a full swing, and watch the ball shoot nearly straight up into the air and stick where it lands. You don't have to "open the face" for flop shots by turning the face outward and aiming away from the hole like the pros do...which is difficult for amateurs. With the Divnick Adjustable, you can adjust it to higher lofts and keep the face straight toward your target. Also, it has long been known that playing the game with the same length club allows you to "groove" your swing and improve your consistency, which is one of the reasons many of our customers excitedly tell us that they have lowered their score with the DIVNICK™. Of course, these would typically be higher handicap golfers who aren't great off the tee. We are not promoting it as a lower-scoring club, but as a more convenient and fun club.

As mentioned above, if you want the best of the two extremes in club length and head shape to go along with the DIVNICK, we make telescopic drivers, hybrids, wedges, and putters...along with irons and custom telescopic shafts on your head!

Since the Adjustable won't do everything as well as a full set, what are the trade-offs? The big one is convenience and cost, especially when traveling.

I like to share the experience of my cousin. We play a lot of golf together, and he loves the 1-club approach to golf...except for putting. While most people can putt pretty well with it, he is not a tall person and it feels too long for him as a putter. For a while, every time we came to a green, he would start to grumble. I finally said, "Why don't you carry a putter?" His immediate response was, "No way, I love walking the course with just one club!" There you have it. A trade-off of significant benefit.

Most people won't use the Divnick Adjustable for serious competitive golfing. It doesn't conform to the USGA or Royal and Ancient Rules of Golf. Most people us it for convenience and fun. It is like having a caddie...all you are carrying is 1 club. After putting, you can walk off the green straight to the next tee. It is a wonderful way to play golf. Many customers keep it in their car in case they have a few extra minutes to practice or get a quick round in when they see a golf course.

Development History of 14 Clubs, Tees, and other comparisons... 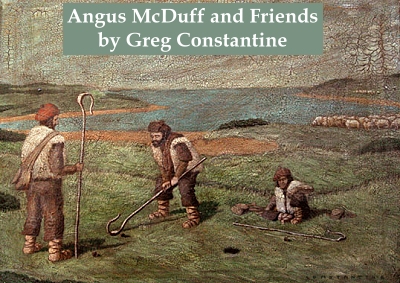 If our shaft and casting technology had been available several decades ago when the Brassie, Mashie Niblick, and Spoon evolved into 14 clubs, it is possible that pros would be carrying only one club today. But of course, that is not the reality, so only a point of reference.

There have been significant developments since the game was first played by shepherds on the hills of Scotland using crooked sticks to whack a rock or tightly-bound balls of feathers into gopher holes. Then, someone decided it was OK to place the ball on a mound of sand for the tee shot. What an advantage that was! But the evolution of golf didn't stop there. Sometime in the late 1800's, someone figured out that placing the ball on a little piece of wood poked in the ground was more consistent than making a pile of sand. Can you imagine the argument when the first person did that? But now we all give ourselves that advantage off the tee with a little piece of wood to raise the ball off the grass...and we all agree that it would be cheating to use a tee anywhere else. There's no logical justification for that, except that it's been agreed to as a rule. The "lie" of the ball is part of the game's challenge on all but the tee shot.

The USGA doesn't allow clubs to have moving parts. The DIVNICK™ replicates far more than 14 clubs, and of course, it has moving parts. We have been asked if we are going to pursue the USGA in court to force them to allow the DIVNICK™ to be used in tournaments. If we did that, our argument would be, "It has moving parts but none of them move during contact so there is no mechanical 'launch' advantage, which is the logical reason for that rule." But as I said above, we are not trying to say that our All-In-One club is as effective as dedicated clubs for dedicated shots, so we don't think it would be advantageous to try to get the USGA Rules changed. We support the USGA, the Royal and Ancient, and PGA's role of protecting the traditions of the game so that records and feats of the past have some relation to how the game is being played today.

And of course, our goal isn't to persuade everybody to quit using their existing clubs, we just want to get everyone to add the DIVNICK™ to their arsenal or to use it when they travel. While some people use it as their only club even on their home course, we'd love it if the golfing masses get one to use when they travel!!!

You can read more about the development of the Adjustable, a link to our patent, and comparing it to other Adjustable's over the years.

In summary, casual golf is about advancing the ball in beautiful surroundings with friends and colleagues. By making a little mental and physical adjustment with the DIVNICK™, we think you will come to agree that using it is a most enjoyable way to play the game. And it sure is easier than lugging a heavy bag around behind you, or schlepping it in and out of airports and paying the exorbitant baggage fees.

Have fun, and hit 'em long and straight!